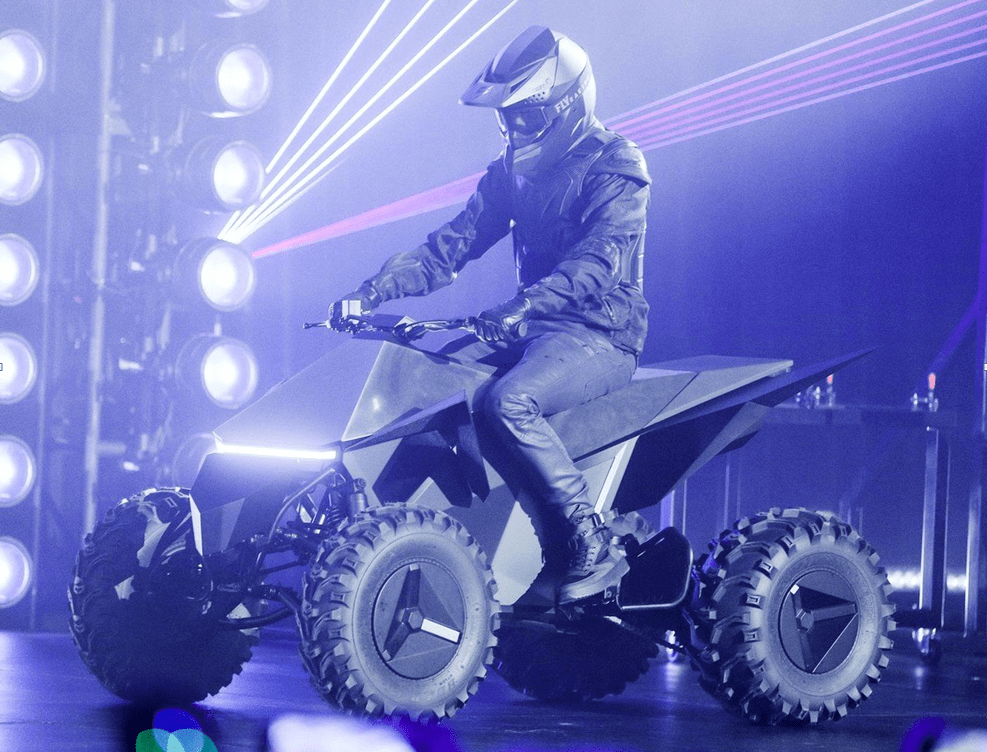 An electric ATV, Tesla Cyberquad will be available as an optional accessory with the Tesla Cybertruck. As of late, Elon Musk has clarified when we can anticipate the ATV to be available for purchase.

During the unveiling of Tesla’s most talked-about vehicle, the Cybertruck on 21st November 2020, Elon Musk also introduced the Tesla ATV. According to the CEO and co-founders, the quad bike was an afterthought. In addition, Elon Musk told the audience, “We also built an ATV.” It was then that a rider arrived on a four-wheeled electric all-terrain vehicle with large, knobby off-road tires. Next, the rider maneuvered the ATV up the truck’s built-in ramp, into the truck’s bed, and plugged it into the truck’s power source. The ATV was used to illustrate Cybertruck’s vault storage capacity and ease of use. In less than four days, Tesla fans and off-roaders have made over 200,000 orders for the Cybertruck.

Fitting in with Tesla’s Cybertruck, the Cyberquad will feature similar style wheels, all-terrain tires, unique headlights, and a matte-black finish throughout. It will include seating for two people- the driver and a passenger. There’s a handlebar with two brake levers on either side, as is typical of ATVs. Given that the ATV is all-electric, we anticipate seeing a small digital display in-between the handlebars; based on a few images going around the internet, this appears to be the case.

At the front, the Tesla Cyberquad will have two shock absorbers, while the rear will have a single, bigger shock absorber located under the seat. There’s no official word on the ATV’s performance, given the minimal information we have. It will, however, be a totally electric vehicle, and that is all we know. Our best guess is that the ATV’s panels will be made of the same ultra-hard 30X cold-rolled stainless steel material used in the company’s pickup vehicle, which, ironically, comes from the company’s rocket ship production line. Certainty, it will be a challenge, to say the least! When it comes to the battery, we’re hoping for a removable battery pack that can be recharged at home. Certain bikes, like the future Seat e-scooter, are capable of this.

The ATV’s price has not yet been announced, but different sources have been in contact with Tesla to find out when it will be available. Every Cybertruck order will come with the ATV, and it will ship at the same time as the pickup truck. Elon Musk confirmed this on Twitter. Thus, the ATV will be accessible in the US in late 2022, while it is expected to be available in the UK and Europe in early 2023. Tesla’s website allows you to order the Cybertruck starting at USD 39,900 or 39,900 pounds.

In a recent article on Shiftup.club about Honda (HMC) selling similar-looking ATVs with internal combustion engines that range in price from USD 5,000 to USD 10,000. Ridgeline pickups with Honda ATVs and motorcycles in their beds are a common sight in Honda commercials. We agree with those who compare the Tesla Cyberquad to the Yamaha Raptor 700R SE. It might be possible that Yamaha is providing the chassis for the Tesla ATV based on their near-identical design, although we can not say for sure.

Leagality of Tesla Cyberquad in UK

Quad bikes must be certified, registered, taxed, and have an MOT if necessary before they may be used on the road in the United Kingdom. Most quad bikes cannot be used on the road because they don’t meet the road safety regulations as laid down by the UK government. We wonder if the Tesla ATV will be able to meet the necessary standards. In response to this inquiry, Tesla’s UK sales representative said: “I assume it will be legal like most other ATVs, but can’t confirm until we have them over there.” For use of the Cyberquad off-road or on private land, one can use it freely without any hassle.

In Elon Musk’s tweets, he said in July that Tesla would be in India by the end of the year or early in the following year. A month later, he stated the same thing to IIT Madras students during a conversation. For Musk, it’s the government’s policies that have stymied his ambitions in India, as well as FDI rules that have delayed his electric car maker’s entry into the country. “I’d love to visit India someday. Tesla CEO Elon Musk has earlier tweeted: “Some challenging government regulations, unfortunately.” With the current regulations and strict import taxes, the price of Tesla in India will approximately be 3 times the price in the US. The future will tell if Tesla automobiles will be sold in India anytime soon.

According to Cybertruck’s specification, it has “room for your toolbox, tire, and Cyberquad, with room to spare.” Elon Musk tweeted a day later that Tesla’s two-person electric ATV will come first as a Cybertruck option. The price was not mentioned. As of November 2019, the trademark “Cyberquad” was registered. Investors saw a Cyberquad prototype at Tesla’s 2020 Battery Day event. By the end of 2021, he said the Cyberquad would be available as an add-on for the Cybertruck as an optional item.